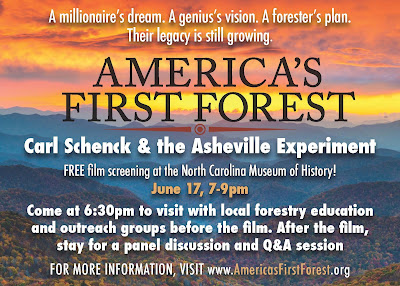 The Department of Environmental Quality's Office of Environmental Education and Public Affairs has partnered with the North Carolina Museum of History to bring a new documentary about Carl Schenck and his role in our nation’s conservation history to downtown Raleigh, Friday, June 17 at 7 p.m.

The North Carolina Museum of History will present a free screening of “America’s First Forest: Carl Schenck and the Asheville Experiment,” the first in-depth documentary film about legendary forester and educator Carl Schenck. The film, which debuted on national public television in April, tells the story of the German forester who managed over 100,000 acres of woodlands at the Biltmore Estate in Asheville and established the first forestry school in the United States. He helped launch the American conservation movement. 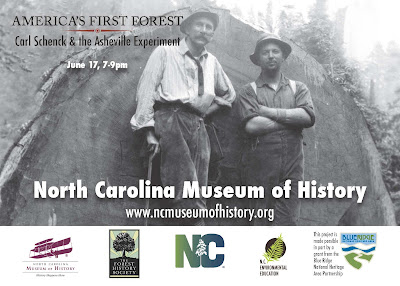 Prior to the screening participants will have the opportunity to talk with local forestry education and outreach groups beginning at 6:30 p.m. The screening of “America’s First Forest” will begin at 7 p.m. followed a panel discussion and a Q&A session. The panel will feature James G. Lewis, executive producer of “America’s First Forest,” historian, and editor of Forest History Today; Brian Haines, public information officer of N.C. Forest Service; Joann Meyer-Cox, CF/CFA and owner of Meyer-Cox Forestry Consultants, LLC. Science comedian Brian Malow will serve as moderator.

Join us for this wonderful opportunity to learn more about Schenck’s amazing story and his pivotal role in our nation’s history.

Visit the Office of Environmental Education and Public Affairs website for more information.

Posted by The N.C. Office of Environmental Education and Public Affairs at 11:41 AM