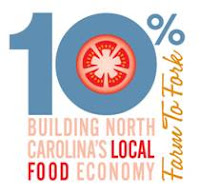 “In these challenging times, buying local foods will benefit our farmers and fishermen and help grow our economy,” said Dan Gerlach, Golden LEAF president. “Golden LEAF is proud to support the 10% Campaign because North Carolina’s agricultural products are fresher, tastier and healthier.”

North Carolinians spend about $35 billion a year on food. If individuals spent 10 percent on foods produced locally – roughly $1.05 per day – about $3.5 billion would be available in the local economy.

“North Carolina is uniquely positioned to capitalize on the increased consumer demand for locally produced foods,” said Nancy Creamer, co-director of CEFS. “Agriculture is the backbone of our economy. The state’s climate, soils and coastal resources support production of a wide variety of produce, meats, fish and seafood. We have the capacity to build a robust local food economy to the benefit of all; the 10% Campaign will help get us there.”

Critical to the success of the 10% Campaign is the active support of the North Carolina Cooperative Extension. Extension has designated a local foods coordinator in all 100 counties and for the Eastern Band of Cherokee Indians to help connect consumers and food producers and support local businesses and organizations who want to participate in the campaign.

Compass Group, the world’s largest foodservice company, is another key partner. In addition to sourcing 10 percent of the produce it sells to all its North Carolina clients from local producers, Compass Group will also work with CEFS to develop a model “farm to institution” buying program.

Three opportunities exist for businesses and organizations to participate in the 10% Campaign. They can pledge 10 percent of their purchasing/growing power; host an employee/member challenge; and/or promote the campaign externally.

The website’s "About" page details more about launch partners and how consumers, businesses and organizations can support the campaign.
Individuals joining the 10% Campaign can register online at http://www.nc10percent.com/ and pledge to spend 10 percent of their food budget on foods produced/grown locally. The website also hosts a wealth of information about the efforts of the many great organizations already working in the field.

For more information about participating in the campaign contact the 10% Campaign manager Teisha Wymore at nc10percent@ncsu.edu or by phone at 919-515-0244. Media contact: Meg Ryan O’Donnell at 919-755-3804 /meg@capresults.net
Posted by The N.C. Office of Environmental Education and Public Affairs at 3:48 PM No comments: Links to this post 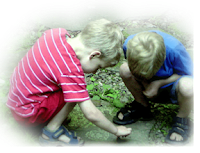 Applications are now being accepted for the “Heading Out! Discovering Nature’s Classroom” teacher workshop scheduled for September 23-25, 2010. The workshop will take place at the First Environments Early Learning Center on the EPA-NIEHS campus in Research Triangle Park, NC. The workshop is offered by the Environmental Education Fund at no cost to participants due to generous funding provided by the Albemarle-Pamlico National Estuary Program.

This workshop will provide educators with strategies to easily incorporate outdoor experiences, gardening, storytelling and art into their curriculum in an effort to improve student health and learning. First Environments Early Learning Center provides the ideal site for educators to learn from a model facility that successfully incorporates outdoor learning into the curriculum. During this three-day workshop, educators will participate in a variety of in-depth investigations that can easily be incorporated in the classroom upon return to the school setting. Hands-on, real world experiences will be emphasized! All content and activities are aligned with the NC Foundations for Early Learning and the NC Standard Course of Study for K-5 Science, Social Studies, Language Arts, Mathematics and Healthy Living.

The Discovering Nature’s Classroom workshop is open to North Carolina early childhood educators and administrators and public, private or charter school teachers or administrators of grades PreK-5. While the workshop is open to educators state-wide, preference will be given to applications from the 36-county Albemarle-Pamlico National Estuary Program region.
For more information or to apply, visit the web site at http://www.eenorthcarolina.org/naturesclassroomworkshop.html.
Posted by The N.C. Office of Environmental Education and Public Affairs at 5:24 PM 1 comment: Links to this post 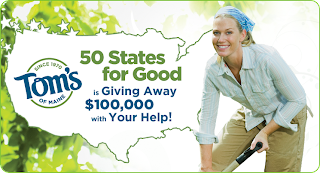 Jay M. Robinson High School in Concord is one of 41 finalists in the Tom's of Maine "50 States for Good" program. This program will share a $100,000 prize in support of grassroots community projects with the five organizations receiving the most votes. Votes can be placed on the Tom's of Maine website until September 10, 2010.
The high school's project is headed by Joy Knight, an AP Environmental Science, Forensics and Earth/Environmental Science Instructor. The project, if funded, will develop a three-season community garden using sustainable farming methods. The garden will be collectively tended and harvested with a portion donated to a local food pantry.
Knight feels that even though this is a local project, it will represent the efforts of environmental education for the whole state, especially on the K-12 level, and hopes that people will take the time to go online and vote. "I hope this project can be a model for other schools and will encourage them to seek similar grants for projects. The N.C. Office of Environmental Education and Public Affairs' grants list and NC-EE listserv are a great resource for this--it's how I found out about the Tom's of Maine program."
Programs like this one can be found on the office's Grants and Contests and Awards pages at http://www.eenorthcarolina.org/. Both can be found under the "News and Events" tab.
Posted by The N.C. Office of Environmental Education and Public Affairs at 12:59 PM 1 comment: Links to this post