Over the years, several enrollees in the N.C. Environmental Education Certification Program have installed schoolyard and community gardens as their required community partnership projects. Gardens like these have become an increasingly popular way to provide environmental education, promote physical activity and increase the availability of fresh, locally grown food. However, good garden management and maintenance is essential to the success of this type of garden. Cindy Lincoln, an educator at the Walnut Creek Wetlands Center in Raleigh, saw this as an opportunity to to help her community as well as communities across the Triangle and possibly the entire state.

Photo from Inter-Faith Food Shuttle, Raleigh: http://www.foodshuttle.org/
Posted by The N.C. Office of Environmental Education and Public Affairs at 12:59 PM No comments: 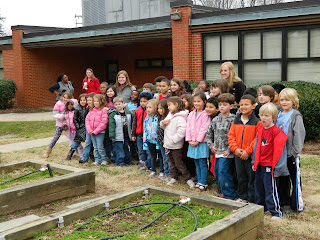 Allyson Cates and Erin Hottle, both pre-service teachers at UNC Greensboro, were recently featured by the Guilford County Cooperative Extension School Garden Network and the North Carolina Community Garden Partners for their greenhouse and garden project at General Green Elementary. Cates and Hottle are also enrolled in the N.C. Environmental Education Certification Program. Different aspects of the greenhouse and garden project are serving as each of their community partnerships, which is a required critieria for the EE Certification Program.
Their projects involve refurbishing an existing greenhouse at the school, growing and planting seedlings with the students and developing lessons and curricula the teachers can use with students when the project is complete. Project partners include the Guilford County Cooperative Extension School Garden Network and The Giving Seed Sustainable Farm, a nonprofit that connects young people with their environment through hands-on gardening and environmental education programs.
Several other UNCG pre-service teachers are participating in the N.C. EE Certification program as well. Other community projects include school gardens, nature trail restorations and projects that integrate language arts, math, science, art and other subjects with environmental education.
Posted by The N.C. Office of Environmental Education and Public Affairs at 10:48 AM No comments:

Did you know it is Prescribed Fire Awareness Week in North Carolina? Governor Perdue has declared the second full week in February a time for citizens to “learn more about prescribed burning and the essential role fire plays.” Many government agencies and organizations in our state use "controlled burns" as an effective land and ecosystem management tool. As a matter of fact, several facilities listed as North Carolina Environmental Education Centers use prescribed fire as part of their land management strategies, and incorporate the concept into their environmental education programming.

Fire plays an important role in many of our state's natural ecosystems. According to the N.C. Wildlife Resources Commission:
Fire once occurred naturally across North Carolina. Low-intensity fires burned every few years, fueled by grass, leaves, pine straw and other forest debris. They kept the forest open, allowing sunlight to penetrate to its floor and reducing buildup of dangerous fuel loads. Fire suppression altered the landscape, allowing fuels to accumulate and putting people and communities in jeopardy.
There are many fire-dependent ecosystems across the state, from the mountains to the coast, including most oak and pine forests. Without fire, many native plants and animals will disappear due to lack of food, habitat and conditions needed for them to exist (NCWRC Press Release).

Read more about prescribed fires at the North Carolina Prescribed Fire Council website: http://ncprescribedfirecouncil.org/prescribed_fire_week.html You can also read respective press releases about the week and the importance of prescribed fires from the N.C. Forest Service, the N.C. Nature Conservancy and the N.C. Wildlife Resources Commission. 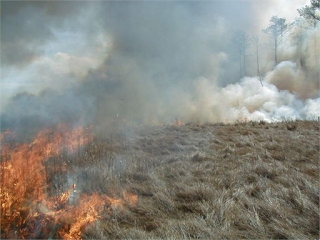 A recent prescribed burn at Goose Greek Game Land. Photo by Brent Wilson/NCWRC.
Photo from NCWRC Press Release.
Posted by The N.C. Office of Environmental Education and Public Affairs at 3:33 PM No comments:

Jack Singley, a ranger at Eno River State Park, recently won the 2nd Place Individual Project Award in the N.C. Department of Environment and Natural Resources Sustainability Contest. The N.C. DENR Sustainability Awards are given annually to N.C. DENR employees, divisions and sections that excel in projects or solutions that save natural resources and increase efficiency in the workplace and community.

Jack's submission was also his Environmental Education Community Partnership, which is required for the completion of the North Carolina Environmental Education Certification Program. The purpose of the Community Partnership Project is to provide candidates with the opportunity to take on a leadership role in a partnership that will have a positive effect on the community and that will increase environmental awareness and understanding.

Jack's project tackled the problem of short cut trails at William B. Umstead State Park in Raleigh. "Short cut trails" are unauthorized trails made by park visitors. They can be a safety hazard and can also cause serious damage to the natural ecosystems the parks preserve. Jack's project enlisted volunteers to restore native vegetation to areas that had been damaged by short cut trails. The volunteers also helped install educational signage about short cut trails to aid in preventing them in the future. The sign was made from an abandoned kiosk from another part of the park, which saved both money and resources.

All Certified Environmental Educators (and their communities) are winners in our book. See some of their projects at http://www.eenorthcarolina.org/certification--criteria5.html 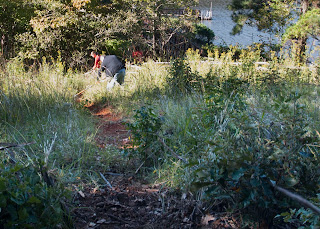 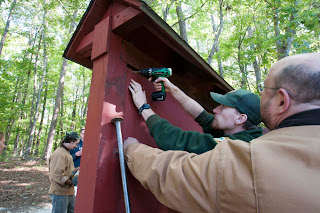 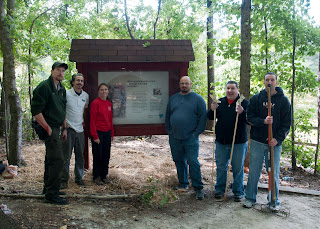 Posted by The N.C. Office of Environmental Education and Public Affairs at 5:19 PM 1 comment: