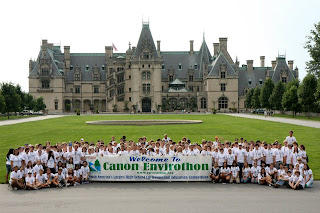 Asheville, NC had the honor of hosting the 2009 Canon Envirothon!

*The North Carolina Envirothon began in 1991 and celebrated its 20th Anniversary last year in 2011.

*The N.C. Envirothon has hosted the North American Canon Envirothon twice in Asheville.

*North Carolina is 2nd only behind Pennsylvania for having the most teams score consistently in the Top 10 over the Envirothon's 25 years!

*North Carolina had the first blind and low vision team in the nation compete in a regional Envirothon. The "Green Knights" from the Governor Morehead School for the Blind in Raleigh competed at the 2011 Area 4 Envirothon in Bunn, NC.

Previous story: North Carolina's 2012 state champion Envirothon team, Enloe High School's "Sub-Chronic Exposure," is on their way to the National Canon Envirothon competition. Teams from 45 states and 9 Canadian provinces will compete in this academic contest which requires a comprehensive knowledge of several environmental topics and issues. This year's focus is nonpoint source pollution and low impact development. The competition is July 22-27 at Susquehanna University in Selinsgrove, Pennsylvania. In 2009, it was hosted on the campus of UNC Asheville.

You can read more about the team on the Friends of Wake County Soil and Water Conservation District blog.

The N.C. Office of Environmental Education and Public Affairs is proud to support the efforts of N.C. Envirothon. Congratulations to all the North Carolina competition winners! Second place went to "D C Endemic," a homeschool group from Davidson county, and third place went to the Durham 4-H "Natural Disasters."

The Canon Envirothon is North America's largest environmental education competition for high school students. In North Carolina, Envirothon is sponsored by the state’s 96 local soil and water conservation districts and their association, with organizing support from the N. C. Division of Soil and Water Conservation. N.C. Environthon offers competitions for both high school and middle school students and also offers trainings each summer for Envirothon team advisors. To find out how to participate, visit http://www.ncenvirothon.org/ or contact your local soil and water conservation district.
Posted by The N.C. Office of Environmental Education and Public Affairs at 12:43 PM