A widely known and respected member of the environmental education community in North Carolina was just named Grandfather Mountain’s executive director after a nationwide search.

LINVILLE, NC — After an exhaustive nine-month search, the Grandfather Mountain Stewardship Foundation Board of Directors has named Jesse B. Pope Jr. of Newland the nonprofit’s next executive director.

Pope, a 13-year employee of Grandfather Mountain, most recently served as assistant vice president and director of education and natural resources. During his time at Grandfather Mountain, Pope also worked as a seasonal trail ranger and on the animal habitats staff before launching the park’s naturalist program, which he led for six years.

“It has been a pleasure to watch Jesse mature within our organization,” said Jim Morton, chairman of the Board of Directors. “He has done a wide variety of jobs extremely well, and we are confident he will be a superb executive director. 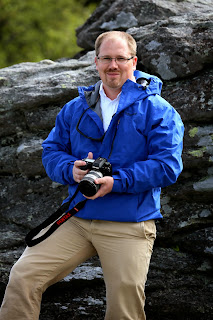 “Jesse appreciates the powerful influence that Grandfather Mountain can have on people, and he understands the importance of preserving the experience here for future generations,” Morton said.

A native of Mouth of Wilson, Va., Pope holds a bachelor’s degree in biology with a naturalist concentration from Lees-McRae College and a master’s degree in environmental education from Montreat College. He lives in Newland with his wife, Michelle, and three children.

“I’m honored to be selected by our Board of Directors,” Pope said. “I very much look forward to the opportunity to work with our incredible staff to guide the organization into the future.”
Grandfather Mountain formed as a scenic travel destination in 1952 under the leadership of founder Hugh Morton and enjoyed more than six successful decades of private ownership.

After Morton’s death in 2006, his heirs sold 2,600 acres of the rugged backcountry to the state of North Carolina, leading to the creation of Grandfather Mountain State Park. They also formed the Grandfather Mountain Stewardship Foundation, a 501(c)(3) nonprofit organization, in 2009 to operate the prudently developed 700-acre portion that includes the Mile High Swinging Bridge, Nature Museum and Animal Habitats.

As executive director of this relatively young nonprofit, Pope will be responsible for the overall management of the park’s staff and programs and execution of the organization’s strategic plan.

He also will serve as the public face of the Stewardship Foundation while educating the public about its purpose, deepening its community involvement and embarking on a targeted fundraising campaign to raise the organization to the next level.

Read the entire press release
Posted by The N.C. Office of Environmental Education and Public Affairs at 1:15 PM