The following text is a press release from the National Council for Science and the Environment. Press release with contact information

WASHINGTON, D.C., (12/17/12) -David Blockstein, Director of Education for the National Council for Science and the Environment was the keynote speaker at the inaugural meeting of the reconvened Federal Task Force on Environmental Education on December 10.

The task force represents a coordinated, Administration-wide approach to foster and strengthen environmental education (EE) activities in the federal government. It will help agencies to leverage EE resources, identify opportunities for collaboration and better coordinate with stakeholders.

The Task Force is chaired by the Deputy Administrator of the EPA and the Deputy Secretaries of Education and Interior and includes the Deputy leaders of the Departments of Agriculture, Commerce, Energy, Labor, Health and Human Services, National Institutes of Health, Small Business Administration, National Science Foundation, NASA, Council on Environmental Quality, and the Office of Science and Technology Policy.

Dr. Blockstein urged the Task Force to take a broad view of environmental education that advances sustainable development and links with the issues of economy, security, energy, health, and climate change. Noting that there was a role for every agency, Blockstein declared that with appropriate education:

Dr. Blockstein reported on the rapid growth of Interdisciplinary Environmental and Sustainability Education at the college and university level. Climate and Energy Education is also starting to rise (as are global temperatures and sea level). However, quoting the late Ray Anderson, the average college student still graduates oblivious to the realities of a finite Earth.(speech at 2003 NCSE National Conference: Education for a Sustainable and Secure Future).

Blockstein encouraged the agencies to look at environmental education in the context of:

technology providing more opportunities for self-directed learning;
increased scholarship on how people learn and best practices in teaching;
the Essential Principles of Literacy for Oceans, Earth, Climate, and Energy
the Next Generation Science Standards to be finalized in 2013.

Dr. Blockstein encouraged the federal government to take on big goals for the next decade:

He noted that all of these actions will contribute to building a Green Economy and remarked that diversity remains a huge challenge in environmental education and in STEM education.

Dr. Blockstein presented Task Force members with the NCSE report - Environmental Research and Education Needs: An Agenda for a New Administration (2008). The report is a compilation of recommendations from thousands of educators, scientists, policymakers and other citizens from the first decade of NCSE National Conferences on Science, Policy and the Environment. He stated that the second term of the Obama Administration is an opportunity to move forward on the specific recommendations contained in this report.

Recognizing that the last time the federal government tried a coordinated effort on EE was 1993, Dr. Blockstein noted that an entire generation has been born and graduated from high school since this time. He urged that much more be done in the next generation.
Posted by The N.C. Office of Environmental Education and Public Affairs at 3:09 PM No comments: Links to this post

Congratulations! See the complete press release with detailed descriptions and photos of each winner on the EENC website. 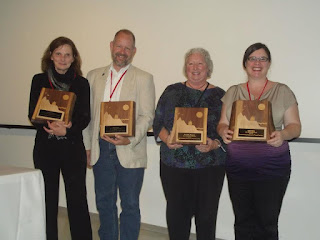 ﻿
Posted by The N.C. Office of Environmental Education and Public Affairs at 2:55 PM No comments: Links to this post

Classroom Earth has announced that the theme of National Environmental Education Week 2013 (April 14-20) will be Greening STEM: Taking Technology Outdoors and will explore how technology can enhance environmental learning both inside and outside the classroom.

As part of Taking Technology Outdoors, EE Week will highlight the growing opportunity to engage today's students in learning about the environment with new technologies that enable scientific research and develop 21st century skills, including creativity, innovation, communication and collaboration.

Educators who register for EE Week will be able to take advantage of:

• Free educator webinars and toolkits offering tips, resources and ideas for using the latest technology to excite students about learning in their community
• Case studies, success stories and examples of technology in action and the teachers who are using it to enhance environmental learning and achievement in core subject areas
• Discounts, giveaways and special offers from EE Week partners, including: a 10 percent discount from Nature-Watch on any online order, a $10 coupon on purchases of $50 or more from the Acorn Naturalists online store, and a 25 percent discount on the Sustainability Specialist Certificate in K-12 Sustainability Education Strategies from the Green Education Foundation.

Schools and other educational agencies and organizations can register to participate in EE Week at their website to take advantage of these and other resources on their website.

The EE research is in...outdoor learning is good for you

A team of researchers from the University of Kansas and the University of Utah recently released a study that revealed a four-day immersive nature hiking experience increased performance on a creativity and problem-solving cognitive task by 50%. In Creativity in the Wild: Improving Creative Reasoning through Immersion in Natural Settings the authors note their results "demonstrate that
there is a cognitive advantage to be realized if we spend time immersed in a natural setting."

This is one of many peer-reviewed research articles archived in our newsfeed under the "EE Research" tag. Take a look and you'll find a number of articles and direct links to research journal articles that show the academic and and benefits of environmental education for children and adults. You can also find more information on our "EE Research and Data" page, including links to organizations and academic institutions that do EE-related research, resources on age-appropriate EE and links to a selected collection of especially noteworthy research. 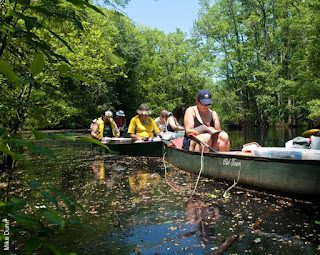 ﻿
Posted by The N.C. Office of Environmental Education and Public Affairs at 1:16 PM No comments: Links to this post

WASHINGTON – U.S. Environmental Protection Agency (EPA) Administrator Lisa P. Jackson has appointed 11 environmental education professionals to serve on the agency’s National Environmental Education Advisory Council (NEEAC). The National Environmental Education Advisory Council is comprised of representatives from organizations outside the federal government who provide EPA with advice and recommendations on environmental education. The council provides EPA with a better understanding of the needs of schools, universities, state departments of education and natural resources. The first meeting of the NEEAC is scheduled for December 13-14, 2012.

“The National Environmental Education Advisory Council provides EPA with insight from men and women with first-hand environmental education experience. This is essential to our work to support environmental education efforts across the country and help Americans understand how protecting the environment is really about protecting our health and the health of our communities,” said Administrator Jackson. “I congratulate our new NEEAC members on their appointments and look forward to continuing to work with the council.”

The NEEAC was established in 1990 under the National Environmental Education Act to provide input from stakeholders to EPA. Environmental education increases public awareness and knowledge about environmental issues or problems. In doing so, it provides the public with the necessary skills to make informed decisions and take responsible action.

The newly appointed members will represent a variety of stakeholders. Caroline Lewis and Dr. Kelly Keena will be representing primary and secondary education. Keena is a science teacher in Colorado and is a lauded environmental educator. Lewis has a wide breadth of experience in education both as a teacher and as the education strategist and director at the CLEO Institute.

Dr. Mark Kraus and Dr. Edna Negron-Martinez will represent colleges and universities. Kraus has served in leadership positions for 20 years and is currently chair of the Department of Natural Science Health and Wellness at Miami Dade Wolfson Campus. Negron-Martinez is a full professor at the Medical Sciences Campus of the University of Puerto Rico and has also held positions in public and environmental health.

Kay Antunez de Mayolo and Vidette (Kiki) Corry will draw on their experience by representing state departments of education and natural resources. Antunez de Mayolo has retired from the California Department of Forestry and Fire Prevention where she remains as a volunteer statewide environmental education coordinator. She has also taught at California Polytechnic State University. Corry has served the environmental education community in many ways and is currently the Project Wild coordinator for Texas Parks and Wildlife Department, chair of the Texas Environmental Education Advisory Committee, and a member of the board of directors of the Science Teachers Association of Texas.

Cara Gizzi and Scott Frazier will be representing business and industry. Gizzi is the director for Public Safety Education and Outreach at Underwriters Laboratories, Inc, where she expands the scope of the Safety Smart Youth Education program. Frazier will be drawing on his experience as CEO of Project Indigenous, as well as his time as Yellowstone Ecological Research Center liaison and Native Waters executive director and project coordinator.

Angie Chen and Richard Gonzales will represent nonprofits. Chen has experience with several nonprofits and is now a program officer at the S.D. Bechtel Jr. Foundation and Stephen Bechtel Fund. Gonzales is a lauded environmental educator and now serves as the project coordinator for the Science and Spanish Club Network, which he initiated in 2000.

Kenneth Gembel will represent the interests of senior Americans and share his 44 years of experience as environmental manager for General Motors as well as his talent in the classroom.

More information on the NEEAC and the list of new members: http://www.epa.gov/enviroed/neeac.html