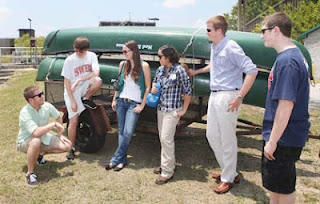 Photo of Sturgeon City Alumni  from www.jdnews.com See more great photos of the alumni in the story's photo gallery!

Sturgeon City, a unique environmental and civic education center in Jacksonville, NC, recently held its first program alumni homecoming. Several individuals shared remembrances of the environmental education programs they participated in as middle school and high school students and described how Sturgeon City has positively impacted their lives, their community and the local environment.

The Jacksonville Daily News quotes Brandon Fresia, who was in Sturgeon City's first program in 1999: "To feel like I was doing something for the community in the future, that I would actually have a say-so in something that was going to be pretty big was huge for me. Thirteen years later (Sturgeon City) has moved 100 times fold from where it started ... so just to imagine where it’s going to be at it in another 10 years makes me excited." Read more about Sturgeon City, the alumni and their experiences in the Jacksonville Daily News, Sturgeon City Welcomes Back Alumni.

Sturgeon City is on the site of the city's former wastewater treatment plant. Several of the original structures remain and some house their environmental education programs. Sturgeon City's story is just as unique as its facilities. For more than 40 years, the City of Jacksonville discharged its wastewater into the New River. In 1997, the City moved to an environmentally friendly and expandable land application treatment system which stopped discharging the treated effluent into the river. Residents were concerned about the severely degraded condition of the waterway and the Jacksonville City Council determined that it was their moral responsibility to help clean up the area where the City’s discharge had occurred. An initiative was created that used bioremediation to help jump-start natural processes. Students volunteered to help and became excited about being part of something that effected a positive change they could see. Further, many were excited about the science being used, about working alongside field scientists and about the power of volunteerism. Their enthusiasm inspired a community to transform the former wastewater treatment plant that had contributed to the problem to stand as a reminder of the civic action that overcame a degraded river and to be a force for the future to protect the river and other natural resources.


Posted by The N.C. Office of Environmental Education and Public Affairs at 2:28 PM No comments: