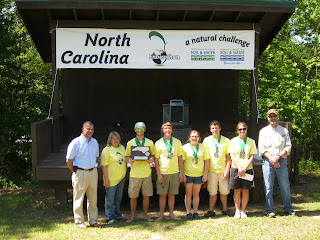 RALEIGH – State officials have announced the winners of the North Carolina Envirothon, the annual environmental science competition for middle and high school students held at a park near Burlington in late April. The five winning high school teams earned cash awards, a plaque and medallions.

They are as follows:

1st – the Sequoias, of West Johnston High School, won $200 and a trip to the North American Canon Envirothon in July.

2nd– the FFA Anti-Derivatives, of Bartlett Yancey High School in Caswell County, won $150 and a chance to compete in the National FFA Competition.

The winning middle school teams also earned cash awards, a plaque and medallions. They are as follows:

More than 100 middle and high school teams competed in the Envirothon competition at Cedarock Park in Alamance County April 29-30. Winners were determined by combining test scores from the Envirothon curriculum’s five subject areas: forestry, soils and land use, aquatic ecology, wildlife and current environmental issues. Teams study resource materials related to these areas throughout the year to prepare for the event.

The Envirothon is sponsored by the state’s 96 local soil and water conservation districts and their association, with organizing support from the N. C. Division of Soil and Water Conservation. For information about the Envirothon, visit http://www.ncenvirothon.org/ or contact your local soil and water conservation district.
Posted by The N.C. Office of Environmental Education and Public Affairs at 10:30 AM